What is a Basement or Crawl Space Sump Pump System Near Winnipeg, Portage La Prairie, Brandon

A sump pump is a pump that is installed in a basement or crawl space, just below the floor. They're designed to collect water from the foundation soil and from a perimeter French drain, discharging the water outside of the house through a line of PVC pipe. A sump pump system involves everything that keeps your basement dry- including the sump pumps, the battery backup sump pump, the sump pump alarm, and the sump's liner, lid, stand, and discharge line.

If you live in Manitoba and would like a free sump pump installation estimate, call or contact BlueMaxx Basement Systems today!

The Sump Pump Liner and Lid 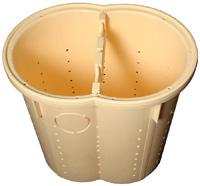 Generally, a sump pump will sit in a sump pump liner, which can range in quality from a cheap plastic or metal bucket to a large, clog-resistant liner. Experienced and reliable contractors will surround the space outside of the bucket with clean stone in order to keep away mud and potentially clogging debris. The sump pit and liner containing the sump pump should be appropriately sized.

Sump pump liners that are too small hold very little water, and the pump tends to discharge it faster than it can enter. This causes the pump to turn on and off continually, which burns out the pump's machinery early. Large sump pump liners also tend to be deep, which means they reach far down into the soil to draw up more water.

Your goal is to keep your basement dry -- not the dirt below the foundation. Deep sump pump liners will make your sump pump work harder than necessary by having it collect water that does not need to be removed for a dry basement.

The liner provided by BlueMaxx Basement Systems is the ideal size- deep enough to keep the pump from short-cycling unnecessarily while being shallow enough to keep your sump pump running efficiently. To keep the sump pump from sitting in dirt and debris that may collect on the bottom of the liner, each pump rests on a stand inside the liner, lifting it up and away from sources of potential clogs. The liner is durable and will not rust, rot, or corrode over time.

This lid serves the dual purpose of sealing away odors and humidity that would otherwise invade the basement, while rubber grommets and an airtight seal keep sump pump noise to a minimum.

Additionally, a sump pump installation can include a drain on the lid that allows the system to drain away plumbing leaks. the best sump pump liners include a special ball-and-cup drain that closes the hole to keep humidity and odors from rising up from the sump pump basin. 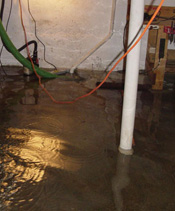 Sump pumps are created with mechanical parts, and like all mechanical things, they will sometimes fail.

Even with a well-maintained sump pump system, any of the following can still happen:

How will you know when your system fails? If you don't have a sump pump alarm, you won't know there's a problem until the basement's flooded.

BlueMaxx Basement Systems' WaterWatch® Alarm can keep an eye on your water level, sounding off to warn you if the levels get too high. 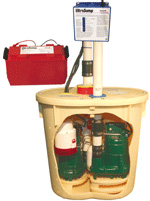 Once you find out that there's a problem, what will you do? Water can flood into a basement at a rate of hundreds of gallons per hour. And during rainy times, it may be a while before a local contractor or plumber can arrive to pump the water away.

A battery backup sump pump can keep your basement protected in the case of power outages or sump pump failures, giving you peace of mind during the night and on vacations, when you can't easily keep an eye on your system.

BlueMaxx Basement Systems has the answer you're looking for:  the UltraSump® Battery Backup Sump Pump. Able to pump out more than 11,500 gallons of water on a single charge, it can keep the flood waters back until the power returns or you're able to service your primary sump pump. Call us today for a free backup sump pump estimate in Manitoba! 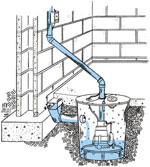 If your sump pump has no way to pump the water out of your house, then even a strong sump system will end in a flooded basement. There are two ways that a sump pump discharge line can fail:

Two pumps discharging into one line:  If you have two pumps in a sump pit pumping into one line, they'll push water in beyond the capacity of the pipe. If this is the case, what good is the second pipe? Running a battery backup sump pump and a AC-powered sump, this is not a problem, but two discharge lines are needed for two AC-powered sump pumps.

Frozen Discharge Lines: In the winter, water in discharge lines can freeze, causing blockage in the line. BlueMaxx Basement Systems can address this problem with the patented IceGuard® discharge line system. IceGuard® gives your discharged water a second exit point should your line freeze.

The Most Reliable Sump Pumps

Sump pumps come in a vast variety of levels of quality- from cheap plastic models and do-it-yourself kits to sump pumps that are installed by plumbers, to cast-iron top-quality Zoeller sump pumps such as the ones installed by BlueMaxx Basement Systems of Manitoba.