How Basements Leak & Where the Water Enters Near Winnipeg, Brandon, Portage La Prairie

Any good basement waterproofer knows that wet basements come in all shapes and sizes, and no two basement repair jobs are exactly the same.

Fortunately, nearly all basement waterproofing repairs can be accomplished by a professional in a single day, or sometimes two.  Smaller jobs, such as installing  basement windows or repairing a basement wall crack, can even be done in a couple hours. 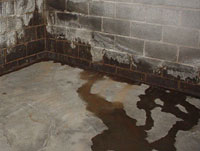 Flooding through the Basement Wall-Floor Joint

The most common way basement water leaks into a home is through the basement wall-floor joint.

Stop the water right at the point where it's causing the problem - along the perimeter of the basement floor.  BlueMaxx Basement Systems does this by removing a portion of the basement floor, creating a trench, and filling it with clean stone.  On top of this stone, the patented WaterGuard® system, an innovation on old-fashioned French drains and Drain tile, is laid.  The system is concreted over, and an extending wall flange creates a 3/8" opening to receive water from the basement walls.

The drain leads the basement water to a sump pump system, which will then discharge it outside through a buried PVC pipe and away from your home.

If there is leaking from a crack in the basement floor, a drainage system and a sump pump is still the answer.

A lateral line can be installed along the crack, collecting the water and directing it to your sump pump system.

A full perimeter system will be able to prevent most water from entering through the cracks in the first place - your waterproofer may not recommend a lateral line for smaller cracks in the floor for this reason. 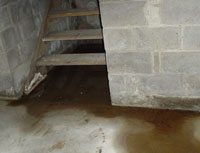 A perimeter drainage system can also address water leaking in through basement hatchway doors.  Water such as this is very common in basements, and because of the nature of the flood, it's one of the most perplexing problems homeowners can face.

As the drain runs along the bottom of the hatchway stairs, it will reach a grated drain that extends along the opening.

The water will leak into this grated opening and enter the waterproofing system, where the sump pump will collect it and discharge it away from your home. 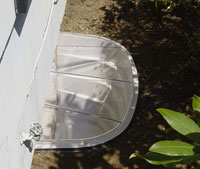 These can be combined with a covered basement window well that will deflect rain, water, and debris from the basement window opening as well as cold winter wind.  The SunHouse™, recommended by BlueMaxx Basement Systems of Manitoba, also reflects natural sunlight as from the outside into your basement space. 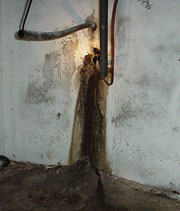 The natural curing process of concrete can easily create cracks in even new home foundations.  And when holes are drilled in basement walls to allow access for pipes, wires, and cables, they often leave an opening large enough to allow water access.

BlueMaxx Basement Systems solves the problem of leaking wall cracks and pipe penetrations by sealing the opening with the FlexiSpan® system.  First, the opening is sealed with a special polyurethane polymer.  This polymer can expand and shrink with the basement wall, meaning that it will not lose its bond as the concrete swells and shrinks with moisture and temperature.

Over this seal, a foam strip is attached and run down into a small drywall created beneath the basement floor.

The secondary layer of protection is then covered over with another layer of our flexible sealant to give it, and the floor is restored flush. It can also run down into an existing perimeter drainage system. 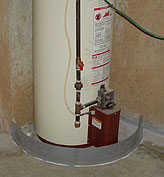 Water heaters can be expected to fail approximately every 7 years.

When they do, they often leak water directly on to the basement floor, pooling significantly.

If your basement is finished or used to store valuable items, this water can be a damaging threat.

BlueMaxx Basement Systems recommends surrounding the water heater with a PVC ring, which can either direct water into the perimeter drainage system or be combined with a water-sensitive alarm that will sound off to let you know a leak is occurring.

Washing machine hoses are not designed to take the continuous 60-80 psi of pressure exerted against them at all times.  If they burst, they can shoot out an incredible 650 gallons of water per hour!  If you do not shut off your water each time you do the laundry, you're going to be glad that you've installed one that's warrantied to stay strong for 20 years.

For a FREE inspection, written quote, and complimentary 88-page color book on basement waterproofing, call or contact them online today!